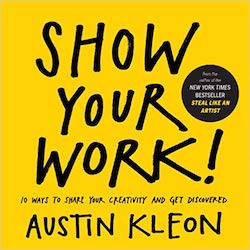 Late last year, after reading the book Show Your Work!: 10 Things Nobody Told You About Getting Discovered by Austin Kleon, I found myself inspired and fired up to start my blog again.

It's taken a little while, mostly because I'm a busy man, but I figure better late than never, eh?

Why it chimed with me

Although a small (but perfectly formed) book, Share Your Work had so many 'aha', and 'oh yeah' moments that it caught me by surprise.

What stood out for me were the sections on "Think process, not product", "Share something small every day", and "Tell good stories".

It's all about the process

Having an eager-to-please imagination, I'm often caught dreaming about what an end product should look like, and how awesome it must be. Which is usually then followed by frustration when the result doesn't come up to my expectations.

Over the past few years, I've started focusing on my process of completing projects and trying to take as much enjoyment from the journey as I can. Reading the section on "Think process, not product" was the culmination of a lot of that thinking.

It doesn't have to be an essay every time

Whenever I've tried to write on a blog in the past, I sit down with lofty ambitions of writing fantastic content with the creativity of Trent Walton or the technical detail of Eric Elliott.

Not surprisingly I come up short, often to a screeching halt, and after a few attempts, abandon the initial concept as "something other people are good at".

I think most of those issues come from a feeling of needing to knock every post out of the park, especially in epic length, meaningful, essayed thought-pieces.

Think of the reader

As both an actor & a tech person, I often forget that there's an overlap; they're not as polar opposite as they first seem.

Yes, there's a lot of logical thinking when coding, and having access to your emotions is much more useful in front of a camera than in front of Visual Studio Code.

However, it's easy to forget that the narrative that forms the foundation of a play or script, can also run through a product (being visual imagery, or even code).

And more importantly, for this blog, it also gives me a framework for writing about what I've been up to, or my interests. Thinking in terms of stories enables me to write as if I was talking to you in person, rather than writing a dry technical document.

I'm a fan of reading psychology and 'self-help' books like the one by Mr Kleon and find that they often inspire me to action and change because of them. However, I think this book specifically spoke to a part of my inner psyche that has reigned supreme over my decisions to start creating something, nevermind share that something with other people.

For years I've not written anything, mostly due to the little gremlin voice in my head saying uplifting comments like "what makes you think you have anything to write?", "no one's going to read it, so why bother", and my favourite "if you write something, people will know how much of an imposter you are!"

As I've aged, I think that type of internal criticism has been at times loud and debilitating to the point of complete paralysis. I'm going to give it my best shot at silencing it (or at least ignoring it for once).

It's easy to underestimate that, as a very fortunate person, I've had the privilege of growing up in a society where I can follow my passions pretty much as the mood takes me.

For the past 20 years, I've been part of teams creating and building online stuff that ranges from selling shirts & ties, through to enabling people to borrow dogs from their neighbours.

As I kick this blog off again, I'm inspired to share my journey of designing & building my latest side projects, and other design & tech topics when I find them interesting.